Talking about anime is talking about romance. Romance is an element that appears in almost every anime movie and series. It is understandable because fictions tend to reflect our reality’s desires and everyone hopes for love and romance. Besides, who will not want to watch a lovely and touching love story? There are countless anime movies about love, from good love anime movies to bad one. Therefore, I am here to help you choose the best movies for you to watch. These movies will tell you the best love stories ever in the anime world. They will melt your heart in the upcoming winter days. Not to waste any more time, here are the heartwarming anime movies about love you must see at least once in your life.

1. Into the Forest of Fireflies’ Light (Hotarubi no Mori e)

Hotarubi no Mori e is one of the best anime movies about love that will make your heart melt in this cold winter. Based on a one-shot shoujo manga by Yuki Midorikawa, the movie begins when a little girl named Hotaru gets lost in a mysterious forest near her grandfather’s house. Out of fear, Hotaru cries. Fortunately, the girl is led out of the forest by Gin – a mask-wearing spirit in the forest. From that day on, Hotaru keeps going to the forest to play with Gin. The two become close to each other despite the fact that Gin will disappear forever if anyone touches him. As time goes by, their relationship becomes something more than just friendship.

Top most beloved and kawaii anime animals ever

Hotarubi no Mori e is a bittersweet love anime movie that will make you both smile and cry. The love between Gin and Hotaru is beautiful but fragile like summer fireflies. They shine so bright but can they stay like that for a long time?

Your name, or Kimi no Na Wa, is among the outstanding anime movies about love in the 21st century. The main character of the story is Mitsuha – a high school girl. She lives in a small town surrounded by mountains. She grew up with her grandmother and sister, in a family that inherits the traditional Shinto shrine ritual. Getting tired of her boring life, she wishes she could be a boy living an interesting and busy life in Tokyo City. But soon, in an unexpected way, she accidentally swaps her body with Taki – a city boy. And a love story transcending space and time begins.

Your Name successfully captures the emotions of the audiences with a touching and meaningful storyline about love and destiny. No wonder why it is recognized as the best anime movie about romance in 2016.

Beside Your Name, A Silent Voice (Eiga Koe no Katachi) is one of the best anime movies to watch for romance lovers in 2016. The story revolves around Nishimiya, a young girl with hearing loss. She straightforwardly mentions her disability in hopes that everyone will be normal to her. However, her classmates see her as a burden and many of them keep on bullying her, including Ishida – a rebellious boy. However, when the Headmaster finds out, the class blames everything on Ishida and starts to bully him. Being in Nishimiya’s shoes, Ishida sympathizes with her and wants redemption by protecting her. And soon, a pure and beautiful feeling starts to grow between them.

A Silent Voice is a beautiful picture of friendship, love and family. It is a suitable choice for you if you want to see a heartwarming and touching love anime movie.

4. The Garden of Words (Kotonoha no Niwa)

The Garden of Words can be seen as one of the best works of the legendary director Makoto Shinkai. The movie is about Takao, a 15-year-old student who dreams of becoming a shoemaker. On rainy days, he often skips school to learn to make shoes in a quiet garden. There, he happens to meet Yukino, a mysterious woman who is much older than him. Since then, whenever it rains, the two of them keep accidentally meeting each other in that garden. As time goes by, their relationship deepens and they start to open their hearts with each other.

The film brings to the audiences a gentle and simple love story despite the age gap between two main characters. It is among the best anime movies about love proving that love regardless of age as long as the two people give each other true and honest feelings.

The Wind Rises is maybe the last work of Japanese animated master Hayao Miyazaka. Many people may not know about this love anime movie if they are not fans of Ghibli Studio. The film is about Jiro – a boy who lived in the early 20th century. With a strong love and passion for aircraft, Jiro becomes one of the youngest engineers of the team. After only 5 years of work, he finally became the head of an aircraft project. However, Jiro fails with his first aircraft building. To stabilize his mentality, he decides to take long-term leave. At the resort hotel, he meets Nahoko – the girl of his life, whom he came across in a past train.

The love between Jiro and Nahoko is heartwarming and heartbreaking at the same time. Although they know their love may not last long, they are willing to give each other the best of them. They show the meaning of what true and unconditional love is. Maybe that’s why The Wind Rises is seen as among the best anime movies about love.

Another film of Ghibli Studio on the list. Whisper of The Heart is the first and only film of director Yoshifumi Kondo. The film opens with a sweet melody of “Country Road”, performed by Olivia Newton-John. The main character is 14-year-old Shizuku, who is spending her final days at her high school. Shizuku is a genuine “nerd”, instead of concentrating on studying for exams, she likes to bury herself in books borrowed from the library. One day, she noticed that a boy’s name was on the loan card of all the books she had borrowed. And there is a strange cat led Shizuku’s way to meet this mysterious boy, who will play an important part in Shizuku’s life.

Whisper of The Heart is a heartwarming and sweet movie about the feelings of first love. The love between Shinzuku and Seiji is so pure and innocent. If you want to find an anime movie about love, this is a perfect choice for you.

Watch Whisper of The Heart movie

7. From Up on Poppy Hill (Kokuriko-zaka Kara)

From Up on Poppy Hill is the second movie of director Gouro Miyazaki – son of the legend Hayao Miyazaki. And he has proved that he is no less talented than his father, especially with this movie. The movie focuses on Umi Matsuzaki and Shun – two normal students. They accidentally meet when participating in activities to protect the old Quarter Latin house from being removed. This place was once the venue of the school clubs with countless priceless memories of many generations of seniors. The encounters make the feelings between Shun and Umi gradually blossoming. However, as they get to their own secrets, it becomes harder for love to be spoken.

From Up on Poppy Hill successfully retells an important historical period of Japan in the story of love, friendship and enthusiasm of young people. Therefore, it is a heartwarming anime to watch for you on cold winter days ahead.

Watch From Up on Poppy Hill movie

8. Weathering With You (Tenki no Ko)

After the success of Your Name, director Makoto Shinkai continues to bring to the audience another anime movie about romance “Weathering With You”. Revolving around the life of a teenager named Morishima Hodaka. At the age of 16, after being so tired of life on a remote island, he decides to go to Tokyo city to seek his own challenge. However, things gradually turn out to be not what he expected as life becomes destitute in the expensive city. And then, in a small valley, Hodaka meets a young girl named Hina Amano, a girl with the strange ability to illuminate the sky through special prayers.

Weathering With You tells a lovely love story between the two lonely people living in a big city. The love between the two characters is not just romance, they are also friends and family, clinging to each other in a difficult life. It is not much to say that this movie is one of the best anime movies about love ever.

9. I Want To Eat Your Pancreas (Kimi no Suizō o Tabetai)

Based on a novel of the same name written by Yoru Sumino, I Want To Eat Your Pancreas is a love story between a high school boy and a dying girl. One day, Haruki Shiga finds a diary in the hospital. This diary belongs to his classmate Sakura Yamauchi. Through it, he learns that his friend is suffering from a terminal pancreatic disease and has only a few months to live. Sakura says that he is the only person outside her family who knew this fact. He promised not to tell anyone else about her disease. Although their personalities are completely opposite, Haruki still decides to be with Sakura during her last days to make her happy.

Unlike its “creepy” name, I Want To Eat Your Pancreas is actually a touching and heartwarming story about love and life. The movie has taught us to appreciate the life we have and the people around us. It is also one of the anime movies about love showing that love does not need to last long to be real, beautiful, and completed.

Topics: anime movie about romance, love anime movie, best anime movie to watch, The wind rises, Your name, From up on poppy hill 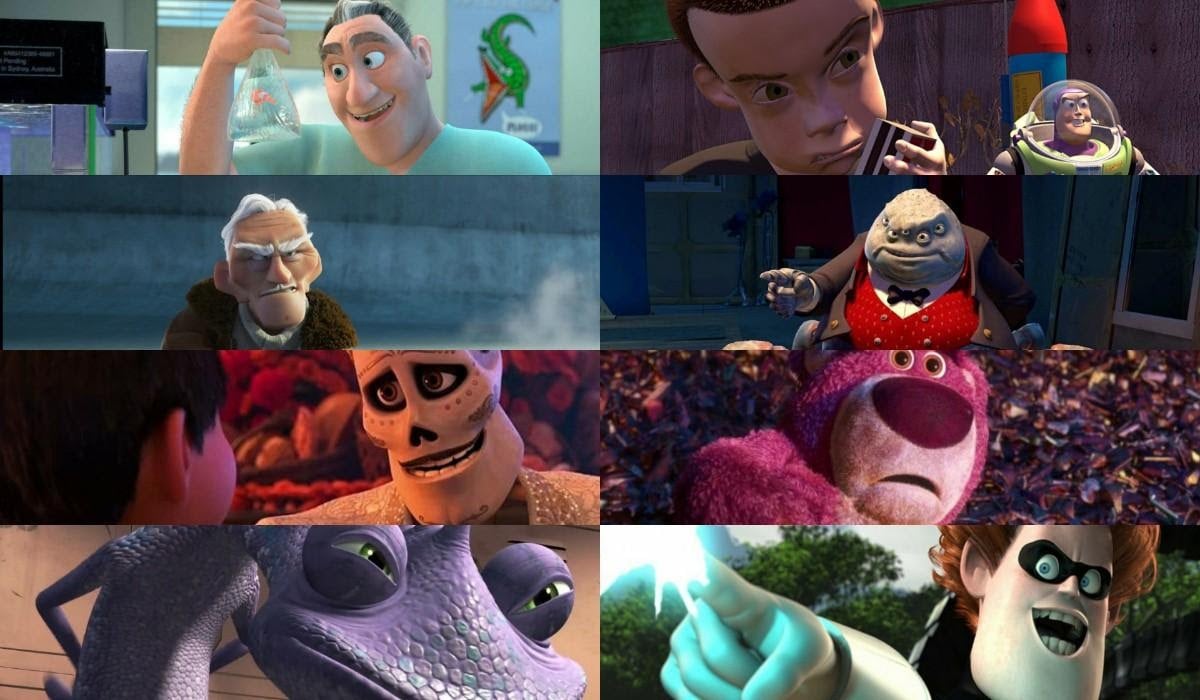